Europe’s largest mobile congress has finally cancelled this year’s event after most of the big telecoms, and tech groups refused to attend over fears of the spread of coronavirus. More and more big names were added to the list of companies staying away from the world’s biggest mobile tradeshow, with Sony, Amazon, Facebook and Intel among the latest to cancel their attendance.

GSMA, the body that organizes the event has decided to cancel the event with important economic consequences. However, there was no explicit prohibition by the World Health Organization (WHO) so far to prevent travel because of the risk of coronavirus, nor from any other relevant authority. Among others, Salvador Illa, the Spanish health minister, declined to announce a public health emergency

For those attendees and exhibitors affected by the cancellation of the MWC, they must also weigh-up the direct economic impact that such a decision may have. Moreover, space reservations for the MWC are usually made a full year in advance, so many of the attendance contracts were likely signed months ago.

At the moment the MWC after cancelling the event is standing by the general insurance and cancellation policies included in the Standard Terms and Conditions for Exhibition, Advertising, and Sponsorship (the “Standard Terms”). According to the Standard Terms, the insurance coverage for an exhibitor includes loss of costs and expenses due to cancellation “beyond the control of the company or the organizer” of up to £10,000 (US$12,953).

However, the small print excludes cancellations resulting from “any communicable disease which leads to i) the imposition of quarantine or restriction in movement of people or animals by any national or international body or agency and/or ii) any travel advisory or warning being issued by a national or international body or agency; and in respect of i) or ii) any fear or threat thereof (whether actual or perceived).”

Thus, the possible costs involved in the decision to suspend its’ participation will most likely be assumed initially by the exhibitors. These costs can be high and generate important points of friction with their insurers as one of the usual causes excluded from coverage is epidemiological risks. This circumstance could mean that possible losses from not attending the MWC will not be covered by their insurance.

Considering the circumstances, it is logical to consider that the GSMA will provide some solution to those who are affected by the cancellation of the MWC, given the particularity of the case with a possible health risk for the participants at stake. However, as pointed out, if the attendee will probably have to assume the losses of the decision upfront.

Slightly different is that GSMA does not want to generate discomfort among the participants of the MWC and can enter into a case by case negotiation to try to reach an agreement, especially with the big companies within the sector. But, in any case, it would be desirable that some mechanism is established to avoid disputes that might arise as a result of this unexpected situation.

It is worthwhile to remind those who may be impacted that the Standard Terms stipulates that English law will be applicable to the agreement and that English courts will be competent to hear the cases. In any event, we suggest that participants should be properly advised both in the negotiations and in any dispute that may arise. 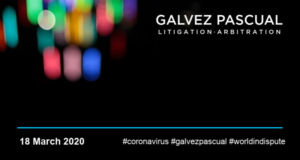